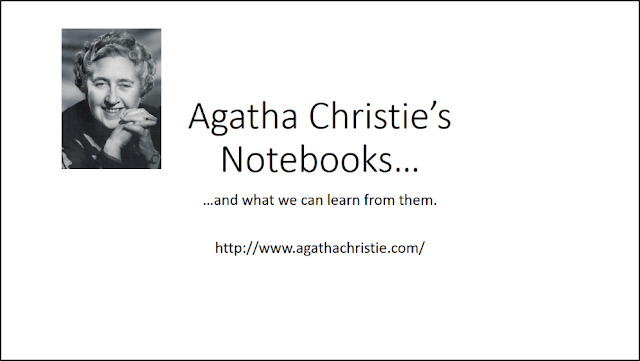 How my analysis all started

In 2004, I designed and presented a Workshop on structuring and planning a mystery. The diagram and list near the bottom is from that workshop. More recently I saw some documentaries on Agatha Christie and her Notebooks. I discovered that her structure is similar and her method much like mine and many other writers. (Or are we all like her?) We write "stuff" in notebooks and eventually, those bits coalesce into a story.
After reading the first book by John Curran "Agatha Christie's Secret Notebooks: Fifty Years in the Making", I designed this presentation.
The second book is: Agatha Christie: Murder in the Making: More Stories and Secrets from Her Notebooks.
Agatha had a solitary childhood and developed the habit of reading copiously. She continued reading, fiction and non-fiction, throughout her writing career. Safe to say that to be s successful writer, one must continue to read. 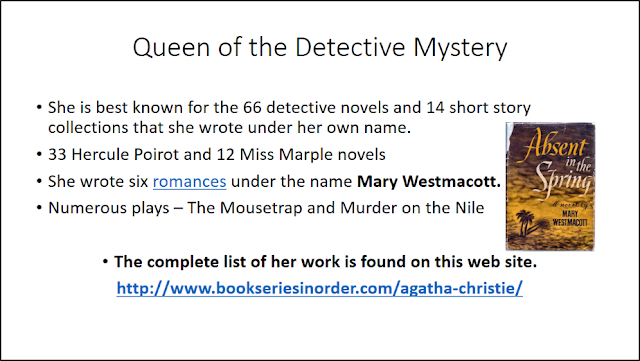 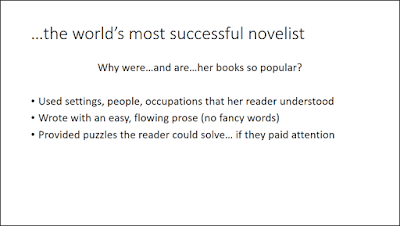 Know what they want and like
and give it to them.

How Murders or mysteries work.

What was in those 71 surviving notebooks?

Location, mode of death, manner of death, discover and reporting of death; items moved in, added to or taken away from the crime scene; clues and red herrings


Her ideas ran through her mind, and she reworked them over and over until she felt ready to write the story.

Location played a large part in her plots. She often picked the location first and used ordinary places allowing her imagination to plot out the murder. She owned eight houses and each of them appear in a book. Locked in a small geographical space, the characters interacted with the sleuth watching, asking and speculation until the evidence jelled about what happened. The 'crucible concept' is often still used for mysteries.


Example from a notebook entry that turned in Dead Man's Folly:

At least three to five characters have motives for killing her victims. Christie always watched and listened and turned the most mundane events and items into clues. She recorded endless varieties of seemingly basic ideas. A key clue often appears early in her books, sometimes even before the murder occurs. If something is mentioned only once - take note. And if the Sidekick makes a statement of opinion and the sleuth neither agrees or disagrees, it's probably wrong.

Back Story
Once Christie had her ideas she used he ABC method, giving each event a letter. (see 1,2,3, sample in chart below) She reordered her points numerous times until she was satisfied. These key events, clues and evidence were used to write the scenes and the unraveling followed a circuitous route.

Mahrie G. Reid, Agatha Christie's Notebooks - and what we can learn from them. When Words Collide, 2015
Email ThisBlogThis!Share to TwitterShare to FacebookShare to Pinterest