An area author’s personal family history has inspired her latest novel, to be featured in a series showcasing Canadian women’s stories over the last 150 years.
“I’ve always known that I had a lot of family history that someday I would like to write about,” said Mahrie Reid. “All these stories then came to fruition.”
Reid is the author of three novels in the Caleb Cove Mysteries series, including Came Home Dead, published in 2014, along with Came Home to a Killing and Came Home Too Late. Cochrane’s Tea … And Other Things carries the books in its local authors section.
Reid has made fast work of her second career, given the Didsbury-area woman really started fleshing out her fiction only after she retired from her job as a teacher in 2013.
“The first two (Caleb Cove) books were partially written (while still working),” Reid said, adding she has been with a writers’ group for 25 years and previously dabbled in poetry and short fiction. “I always knew that once I reached retirement that I would then write seriously, for publication.”
Last fall, Airdrie publisher Books We Love approached Reid to pen one of 12 historical novels in their Canadian Historical Brides series to honour Canada’s 150th birthday.

The first book, titled Brides of Banff Springs, was written by Calgary author Victoria Chatham and released in January. The second featuring an Ontario story was released in March. Fictional archival stories of immigrant brides and grooms from all provinces and territories will continue to find their way into bookstores until July 2018.
Reid’s novel, titled The Left Behind Bride and set in Nova Scotia, is the 10th in the collection and will hit shelves next April.
The main character, yet unnamed, is a bride for just 10 days when her husband is shipped overseas and does not return. The widow is then courted by a fisherman – who gets lost at sea.
“In this book, she’s decided that she’s going to have to take care of herself,” said Reid of her heroine. “It’s about survival.”
Reid’s own mother was widowed at 24 years old, and she said her mom’s experiences were inspiration for the fictional bride’s challenges in the novel.
“She had quite the story of survival of her own,” said Reid, adding her mother’s first husband “drowned in a river you can walk across.”
“She had another incident with a guy that courted her – they were about to be married and she found out he had no intention of taking her two children.”
Reid said she won’t give away too much more of the plotline – but she’s excited in general to share stories about such a rich time in Canada’s history about women who haven’t yet had a spotlight shone on them.
“You don’t hear about the ordinary, everyday women,” she said. “It took a lot of digging to find any books to find about the days of everyday women.”
Reid will continue to write The Left Behind Bride, and in the meantime is about two-thirds of the way through the fourth Caleb Cove book – entitled Came Home from the Grave – which is due out in June.


5.0 out of 5 stars
Fast-paced suspense, atmospheric setting, resourceful heroine. Impossible to put down.
By Swati on July 18, 2016

Format: Kindle Edition
Emily Martin is a genealogist by profession, but her own family history is hidden, even from her. This story begins when a letter arrives from her absconding—and once criminal—father who has secrets to reveal.

But someone is shadowing both the father and the daughter. Someone with revenge on his mind.

Most of the story takes place in the haunting and atmospheric setting of Caleb's Cove in Nova Scotia, where a small and tightly-knit community holds a bagful of secrets. There are moments in this story with the cozy feeling of an Agatha Christie novel, but danger is right around the corner, ready to sweep the ground from under your feet and take you along on a thrilling ride.

I did not want to put this book down, and neither will you. Grab it right away.

4.0 out of 5 starrs
A Great Small Town Modern Mystery
By BMCBookBabe on September 1, 2016

Format: Kindle Edition
CAME HOME TOO LATE is the 3rd book in Mahrie G. Reid’s Caleb Cove Mystery series and I think it's the best so far. The heroine, Emily Martin, is a well-developed, sympathetic character, and the hero, Harvey Conrad, is strong and smart, like a great mystery sleuth should be. The hint of a potential romance between the two adds a little somethin’-somethin’ to this modern cozy but in no way detracts from the plot. The author drops you into the intrigue right from the start with a woman on the run from an unknown threat and works her pacing to keep the reader on the edge up to the very last page as the mystery unfolds. The beautiful Nova Scotia setting is again front and centre with the unique cultural references woven in with a light hand. Anyone who enjoys small town cozy mysteries in an updated Murder She Wrote style is sure to love this series.

Came Home to a Killing (Book 2)

It was a great read, and the pacing was consistent and just made me want to keep reading. I also appreciated the absence of profanity. James Fisher, June 2016 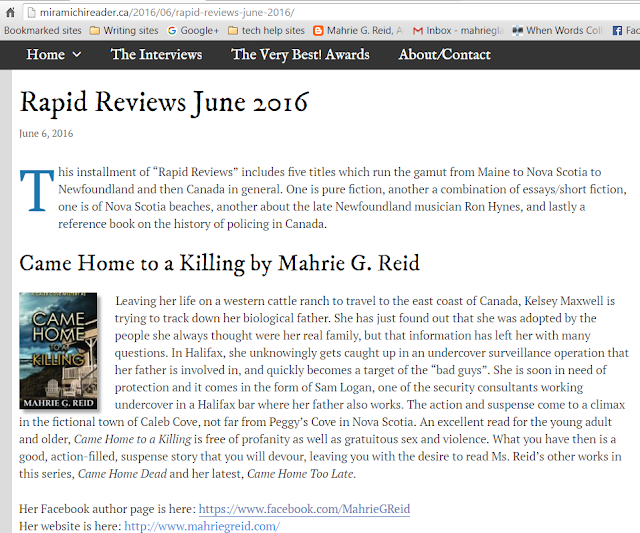 Loved the flow of the story and the surprise ending. Loaned this to my mom and she read it in one sitting
cause she said she couldn't put it down. Can't wait for book three!!

4.0 out of 5 starsA Story of Secrets
Bykybookwormon July 11, 2015
Sheldon Harris is a jerk, but he doesn’t deserve to wash up dead on an island off Nova Scotia during a hurricane. Devon Ritcey doesn’t deserve to be blackmailed, and Greg Cunningham doesn’t deserve to have his pity party interrupted by finding Sheldon’s body, but that’s life. Greg has withdrawn from his former life as an undercover police officer and come home to Nova Scotia to recover from his physical and mental wounds. Between the arrival of Devon Ritcey, a childhood friend with whom he shared one passionate night and the finding of Sheldon’s body, Greg is forced to face life again whether he wants to or not.

This setting is so realistic and so perfectly established that I can smell the shores of Nova Scotia.
I can hear the water and taste the wind, and that is great writing! This page-turning who-dun-it not only keeps you
glued to a very well-written, well-executed plot, but weaves a reader right into the tangle of unresolved emotions
roiling within the characters themselves. The chemistry is magical. The characters are deep and believable,
and the author has done an excellent job of fleshing them out without overdoing introspection.
A lovely balance. A true pleasure to read. Refreshing!