How to grow football sized potatoes in town.

Want to grow your own potatoes?

Don't let lack of space hold you back. Get some tires or materials and stack your taters.

Gardening isn't one of my passions - far from it.  But my husband grew up with veggies grown at home. He always wants to grow his own. This year he finally got his row of  potato hills. We live in town so have limited space. Hubby researched growing is small spaces. 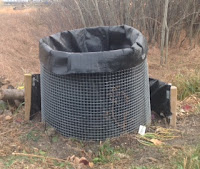 His solution was to adapt the "stack of tires" approach. He used chicken wire to make cylinders and then lined them with black plastic. All the parts were available in our extremely full garage. 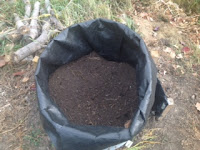 After a trip to Olds College composting department for a load of fresh compost, he mixed his soil and layered the concoction in the bottom of the cylinders. (About 4 inches deep) He planted one potato. When its green top sprouted, he added more soil and another potato, and then once again repeated the process.

He also made plastic damns around several potato hills at the top of the ravine and added soil to three more spots. He planted a couple of potatoes in each. Then we kept them watered if it was dry out and waited.

Recently we harvested our crop. The results ranged from smaller, tasty "new" potatoes to several that were as large as footballs. Shown are two of the medium sized potatoes. We've already eaten or given away the biggest ones. One of those made enough mashed taters for four people. In all, we harvested two rubber bins full.

The biggest ones came from the first layer in the cylinders. The cylinders produced the largest number of potatoes and the dirt spots the fewest. In all, we harvested two rubber bins full. I suspect we'll have our own potatoes well into the new year.

Do you like tasty, crisps fresh and organic potatoes?

Grow your own. You'll be glad you did.