War Brides - One story of friendship.


After WW1 thousands of young women came to Canada with their soldier husbands. Although some came from France and the Netherlands, most came from the UK. Not all War Brides were welcomed by their husband's families or communities. Many young women were anticipating finding husbands among the returning men and weren't pleased they'd been "snapped up" by British women.

This story is only one of many told by my mother about that time in our history. Others are grim, tales of those who did not return home and those caught in the gassing at Ypres. This one is more cheerful.

A young British bride ended up in my mother's home village of Sherbrooke. My grandmother befriended her and they were BFF's of the time. Unfortunately, I don't know the woman's name. But at some point, the English gal gave my  mother one of the prize possessions she'd brought from England--a china tea cup and saucer made in the 1800's. 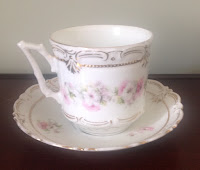 The teacup has come down through the family with the story. It is a reminder of the importance of friendships and reaching out to those around us. A memento of a difficult time in our history.

What family mementos do you have? And what is the story behind them?

Do you have a chain saw murder in your family?


These six history snippets from my family history are true - or so I've been told.

- One of my ancestors killed his wife with an early version of the chain saw.  Chain saws first appeared in 1785 but became more prominent in 1926. The earliest were hand driven like an old egg beater or drill. Later ones where powered by various means but were large and cumbersome. Which one this supposed killer used, I don't know.

How to get away with murder.

- My grandfather, the local justice of the peace, was once called to the scene of a murder where the husband reportedly killed his wife with a stick of fire wood and then threw the evidence into the wood stove.

- At another time, Granddad closed down a whiskey still and kept the equipment in the upper hall of his home waiting for the magistrate to come for a trial. My grandmother was not enamored of the resulting odor.

My five uncles loved pranks and placed chickens in the school room on one Halloween. The resulting mess took days to clean and everyone had a holiday. You can still see that school in the historic village at Sherbrooke, Nova Scotia. Unfortunately, May 2015 there was a fire that caused some damage to this school house of the past.
Those five uncles later all served in the military during WW11.


- One family member was a bigamist... a war related event. Enough said.

- The minister and the Sunday School Superintendent: 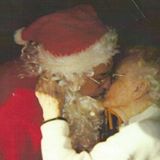 We used to delight in telling people that my father (the clergyman) and my mother (the Sunday School Superintendent) lived together for two summers before they married. Not unusual today, but in the 1940's it would have been scandalous. However, when we look closer, we find out that she was a widow living in the Manse and one of her duties was to provide room and board for the summer student minister. He courted her the following year by mail and they were married in 1947 and remained married until they died in their 90's. This is the photo of their last Christmas together.

What tales - tongue in cheek or other wise, are in your family?