What do Captain D.L. Creaser and John Lennon have in common?

Riverport was settled in 1604. Rum runners, caves and sailing men make a potent mix. For generations the men of Riverport and Rosebay went to sea. 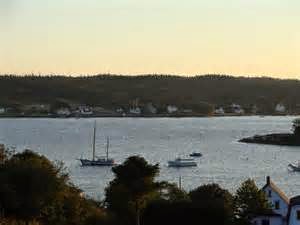 The harbour of Ritcey Cove is free from shoals, and marine craft are safe from every wind. It is considered one of the finest harbors in North America. Sailors and fishermen have tied their vessels to the wharf there for centuries. Even a generation before mine, boys went to sea as cabin boys at the age of thirteen, sailing on ships powered only by sails. The runs often went to Spain for salt.

Those boys grew into first class sailors and many served in the Merchant Marine during WW11. My children's grandfather was among those ranks and his achievements illustrate the fortitude of those sea going men.

His wife remembered hearing an announcement by the infamous Toyko Rose that he and all his shipmates were lost at sea. It was weeks before she knew the truth. They were all safe. Family legend also notes that he swam through seas covered in burning oil to take the rope for a buoy chair to a floundering ship. He saw the entire crew to safety before he left the burning vessel. He never mentioned it. The story came from his shipmates.

Even in non-war years, it was a tough life with often eleven months between visits home.
Later in life he was one of the few captains qualified to handle a full masted sailing ship. Family rumor has it he was asked to captain the Bounty replica for the movie but declined.

After years as an officer on the Lady Boats for Canada's West Indian sailing fleet, he worked in the Canadian Coast Guard captaining the buoy ships. As Captain of both the original Griffin and the new one built in the 1960's he served along the Saint Lawrence River for years. In the end was the most senior captain in Canada.

Is it any wonder I am drawn to this location and its people for my reading and to populate my Caleb Cove Mystery Books. What location are you drawn to because of its history?

And if you weren't sure. Both John Lennon and Douglas L. Creaser were awarded the MBE.