Writing the Fiction Series
The Complete Guide for Novels and Novellas
Based on the book by Karen S. Wiesner
And presented with her approval and permission

What is a series?

How does a writer get into a series?

Publisher generated Series
•      - publishers like series because each book helps sell the next and the former
•      - most likely genres for these – romance, paranormal or fantasy-oriented
•      - written by authors hand-picked by the publisher
•      (these can be the trickiest to do)

The TIES that link a series
•      Mary Jean Kelso, author: “There needs to always be a firm stake to tie the story to.”
•      1) recurring character (Miss Marple, Sue Grafton, …)
•      2) central group of characters where members of the group take turns as the main character (Shannara Series, Spirit Creek Stories, Look Behind You,)
•      3)Premise/Plot Series (books linked to inherited items – Family Heirloom Series; Home for the Holidays by Linda Varner Palmer center around holiday stories, Blossom Street series (Debbie Macomber); Diet club Series by Denise Dietz
•      4) Setting Series- setting is the same in each book, characters may or may not change (Harry Potter goes to Hogwarts in each book, but he is also the main recurring character. Caleb Cove Series is a setting with a cast of characters but the main character is each books changes).

Why are ties important?

Story arcs are completed in each book

Each book could be read as a stand alone
•      All the elements used for any novel are present in a book within a series.
•      Introduction to balance “usual” life (can be quite short)
•      Inciting incident/change – a conflict disrupting character’s life
•      Both plot and story are present. (i.e. external and internal elements)
•      Actions and reactions – progressive conflicts & tough choices
•      GMC
•      Black moment/downtime/crises point/ all is lost/ It looks like it prevents them from getting their HEA (which they have had a glimpse of)
•      Climax/ the win/ the resolutions and the summing up of what has changed

What are Series Arcs?
-          plot introduced in the first book, alluded to in all others, wrapped up somehow in the last book
-          - fits seamlessly with the individual story arcs

If not, what are the exceptions?
-           - books with a recurring main character, but other than their profession or hobby, the individual stories are not connected
-          - no clear and measurable end in sight

What do series arc look like?
They can be:

Simple
•       happiness and love for all members of a group (romance)
•      Each lead solves a problem and brings justice to the case (ex-marine groups)
Clearly defined
•      Quest stories, fantasy kingdom stores (Heritage of Shannara Series), some thrillers (Intuition series)

Planted arcs –
•      Used in a series with an ending.
•      Small details, seemingly unimportant, that set things up for something in an upcoming book
•      Repeated references to a character or an item in passing
•      Extends the Chekhov’s gun theory
•      It is a plot device that is believable – or sets up for something in the future to be believable. (put-outer in Harry Potter)

Avoiding information dumps and “as you know” character speeches
Mini details woven in
•      Mini-flashbacks
•      Using quick questions
•      Teasing about an old event
•      Newspaper articles or diary entries
•      Using a group hierarchy at the front of each book
•      A family tree at the front of a book
•      A map of the village or area involved
•      Use at least on fresh beta reader for each book – then if they are confused you know you’ve not put in quite enough. If they are bored…you have too much.

Consistency
•      all the usual things like eye color, education, number of siblings, birthmarks, hobbies, phobias….
** For these things you want at least one beta reader who is reading all the books in order for you.

Check out Phil Farrand’s “Nitpicker Guides to Star Trek and the one for the X-Files”
Farrand breaks them down to:
Plot Oversights
Changed Premises
Equipment Oddities
Continuity
Production Issues
And more recently in “Nitpicker’s Guide for X-Philes” he added:
Unanswered questions

Modified for authors these become:

1)  Oversights - explainable or illogical items, plot holes or uncharacteristic actions. The often referred to "A deus ex machina" situation is one of these.

2) Changes Premise: “If anything concerning character, plot or setting directly conflicts with something previously established in the previous book(s), it fits here.

TECHNICAL PROBLEMS
•      We might refer to some of this as Craft problems – jumping in and out of POV without realizing it.
•      Characters that had a certain vocabulary and dialect and then in one book, it is just gone with explanation – that’s a tech problem
•      Using or not using cell phones to further the plot – or not wearing a vest because a character needs to get injured when before they always wore a vest – that’s a tech problem.
•      Not acknowledging current tech equipment because it’s convenient not to – that’s a tech problem.

CONTINUITY
•      Continuity is the flow of the story – having everything from book to book appear in an appropriate time.
•      Date of a baby’s birth might be referred to – you want to make sure it lines up appropriately with when the couple met and married or whatever.
•      It is also having the setting constant – if an outhouse is blown over in one book – have the right it before using it again. If a tree blew down and was sawn up and hauled away – don’t have anyone take shade under it in a later book.

UNANSWERED QUESTIONS
•      If you are not going to resolve a question somewhere in the series – don’t bring it up at all.
•      If you plan to answer it two books down the road – remember to do so – and also have a couple of plants in the book in the middle to remind readers of it.
•
HOW DO YOU MAINTAIN CONSISTENCY AND CONTINUITY?
Use a series ‘bible’.
A series bible is a binder or book with all your story blurbs, your series blurb, your character sketches and charts of who is related to whom, who is in which book and their role, their relationships to other characters and their unique mannerisms.

For each mystery you can chart your suspects or interviewees and list who knew what, who heard what, saw what, and smelled what and so on. And who did they tell? List their alibies and if they can be confirmed or not.

Put anything in this book that you might need for following stories. Town layouts, house configurations and location descriptions. 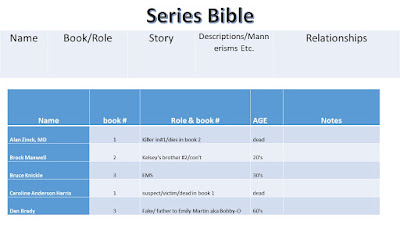 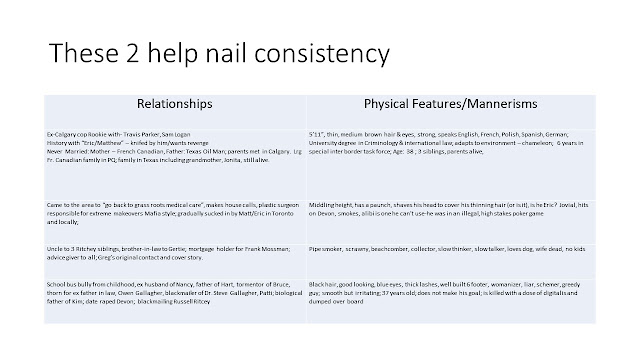 THE END (for now)


Where to find more information from Karen S. Wiesner

This is partial information only. There is more and it can be found in Ms. Wiesner’s books and articles as listed here.
Book: Writing the Fiction Series – The complete guide for novels and novellas by Karen S. Wiesner (ISBN978-1-59963-690-0)
Article: http://www.nownovel.com/blog/how-to-write-book-series/
Worksheets - a pdf, printable workbook (32 pages)
http://www.writersdigest.com/wp-content/uploads/Writing-the-Fiction-Series-worksheets.pdf

Great Tips on How to Write Your Memoir | Reader's Digest
www.rd.com/advice/great-tips-on-how-to-write-your-memoir/

MATERIAL IS THE PROPERTY OF KAREN S. WIESNER
AND WAS PRESENTED IN AN AUGUST, 2017 WORKSHOP
BY MAHRIE G. REID with MS WIESNER’S PERMISSION