How many faces does Neil Enock have?

In this blog you'll meet NEIL ENOCK author of Mayan: Atlantis Returns and Doc Christmas and the Magic of Trains. 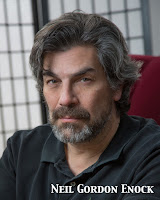 From pirate's red vest to priest's white collar and woodworking tools to producers mega-phone this man wears many hats. He appreciates his many readers and shares information with them in the following interview.

Enjoy his answers to some pressing questions (I laughed out loud at some of them), and learn what motivates a man to write in the middle of a busy, busy life.

Hi Neil,
You are busy. With film, writing and wood working, do you ever get into trouble?

Based on the length of time I’ve taken getting these answers back to you, I suspect the answer may be obvious, but generally I choose to say no, I don’t get into trouble.

My acting roles usually take precedence as they are on someone else’s schedule and are usually just a day or two here and there. I have in the past turned down acting work due to conflicts with my overall schedule. Making my custom cribbage boards is usually doable in between other things. It goes in waves and lately I’m even able to hire a bit of help in that department. Things like directing a film or launching a new product steal huge blocks of time and can really upset the apple cart, but careful planning can make things fit.

You’ll notice I mentioned writing last? Well, it is seriously difficult to find quality time to write. I was making do fairly well until I lost my best friend, who was my Alpha reader and muse, to Cancer in January. In addition to the loss, I subsequently agreed to take over his role in the stage play ‘Vizard’ which added to my schedule. It has taken a few months to get all the balls back in the air and has now forced me to set back the launch date of my new book, which is ironically the first book in  the ‘Vizard’ series. Yes they are connected.

Oh, and in case anyone asks... Yes, it is a bit odd to be on stage and actually playing the role of the main character in the book you are writing. 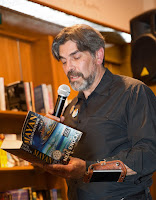 What prompted your interest in Mayan and Minoan cultures?

This is a huge question because the story of Mayan: Atlantis Returns came to me without any real knowledge of either culture. Researching both cultures then finding a plausible connection between then even though they were almost 2 millennia apart was incredibly exhilarating. I had no idea how much I’d learned until I saw Director James Cameron on the National Geographic special ‘Atlantis Rising’ last week. Cameron makes a major incorrect assertion about the Atlanteans (Minoans) that skews the entire show from an explorative mission to a sensationalist tome. Don’t get me wrong it’s still very good, but the stated motivation for their explorative path is, well, incorrect.

If you could cast your characters in the Hollywood adaptation of your books, who would play your characters?
I’d love for Jay Baruchel to play Bob, as I think he will be the right age by the time we get there. I met him at the Banff Media festival last year and he’s great. Anne Hatheway would make a great Princess Itzela and Patrick Stewart would be an excellent Aranare.  It would be very cool if Steven Spielberg liked the story enough to play himself. That way, maybe we could film the scene that takes place on his yacht… on his yacht!  The rest I’ve got nobody specific in mind for yet.


How important are character names to you? Do you choose the names based on the way it sounds or the meaning?

I research names, their origins and meanings and choose based on both how it feels and the meaning.  If both line up it’s a winner!  Minoan names were harder, as there are no real records. However since the Minoan culture is in the root of the ancestry tree of most of Europe and the Mediterranean, there are lots of root names to choose from.  You’ve reminded me that I need to post an audio file on the website with the ‘correct’ pronunciation of some of the names.

You are creating a series. Did you have outlines or ideas for more than the first book when you started to write? Did you decide on your overall story arc for the series in the beginning?

I wrote the outline for the story as a movie treatment several years ago.  When I started turning it into a novel the idea was just one book. Through the course of writing, it became very obvious that that the world as I was describing it could not be explained or contained in a single volume, let alone over the timespan of 5 millennia. By the time the book was done, it needed to be a 3 book series. I have since been asked enough about one story aspect to see how a fourth book could fit right in as well.

What are you working on now? And when can we expect Book 2 of the Mellennia Series?

I am working on the first book of the Vizard series, ‘Forged’.  It is a new strain of Greek mythology that forms the basis for the stage performance ‘Vizard’ that I am now cast in. It will likely be out before ‘Atlantean’ the name of the sequel to ‘Mayan: Atlantis Returns’ and the second book in the series.  It should be out this fall.

What is the biggest lie you’ve ever told?


Simple. “I know what I’m doing.”  Useable almost anywhere to cover up the process of educating ones self.


When and where did you learn your woodworking skills?

Much of my life can be defined by the following… ‘Ready… GO…  Set…’  As you can see this is a bit out of order.  When I had the idea for my 3D cribbage boards, I wanted each board to tell a story.  I tried to get someone else to make them for me, but they kept putting me off.  Finally, to get me to go away, they offered to sell me the machine that does some of the work.  Once I had it, I had to learn how to make it go, (reference…’What’s the biggest lie...’ above), So I taught myself.  I really like to try new stuff.  I’ve even renamed my company to iTinkr Inc. to reflect what I really do.

Is there anything else you’d like readers to know about you and your work?

Somehow, I seem to have become a ‘Storyteller’.  There can be no such thing without an audience.  My friends may have motivated me to get here, but it is the readers of my books (and the viewers of my stories) that have made me a best seller and continue to drive me to do better. I often wonder if the people that read our stories, that find the hidden clues and truths, that smile with our character’s happiness and shed a tear at their sorrows realize just how important they are.  Without them we can not be.  I want your readers to know how honoured I am by the time they chose to spend in our stories and here on your blog, with the stories of our stories.

Fast and fun questions. (A few words of explanation are allowed).

Please answer yes or no. Have you ever:
1)      Danced naked in the rain? No, but I might be willing, depending on the partner and audience.
2)      Ridden a camel or an elephant? Not that I remember, The Zoo Gala is pretty foggy though…
3)      Jumped out of a plane? Yes. A Cessna. Parked on the tarmac.  Not that exciting really.  J
4)      Been in a bar fight? No fight of any kind, ever. Being a storyteller has it’s advantages – so does being able to run really fast.
5)      Gotten lost in a strange city?  Never lost, but I have gone to a train station in Austria and got on the next train without even asking where it was going… just to go somewhere unknown. (Turns out Switzerland is quite nice!).
6)      Shared your ice cream cone, lick for lick, with your pet? (What kind of pet was it?)  That’s just wrong.

Thanks, Neil, for taking time to answer the questions. I'm sure anyone reading your answers will be willing to seek out and read your books. To learn more about Neil and his adventures, and to find his books, check out the following links.