If you like strong, evil and female antagonists, then you need to read the Intuition Series by Makenzi Fisk. Today I'm featuring this mystery/thriller writer, and getting answers to some of the questions I've been meaning to ask her.

Makenzi Fisk's novel, Just Intuition, earned her the distinction of Golden Crown Literary Society Debut Author as well as Mystery Thriller Finalist. Her books take readers to crime's gritty underbelly, northern-style, where few can tell the bad guys from the good ones, and a little bit of intuition always helps.

Retired from urban policing, Makenzi currently lives in Calgary. She looks forward to her summers in the ruggedly beautiful Canadian Shield, the inspiration for her backwoods thrillers.

Q. Your first three books have a strong thriller element. When you started the intuition books, what was your intent for the story? for the number of books? How did that change, if it did, as you wrote?

A. When I began to write Just Intuition, I did it out of an overwhelming need to tell a particular story. The catalyst was the antagonist, who was a combination of a number of pathologically toxic personalities I had been personally impacted by, either in my professional career as a police officer or in my private life. All the worst qualities of those people were rolled into one character who wreaks havoc on every person with whom they interact. I'm always interested in the psychology behind human motivations and that is why I wrote the antagonist in first person. I needed to understand and I also wanted readers to have insight on the thought process of a developing psychopath.


My intent for Just Intuition was to get that story out. Partway into the writing process, I realized that this antagonist would not be so easily contained. There was more substance here than could be confined in a single novel, or even two. Three novels felt right and the Intuition Series was conceived.


Q. What is your "work" schedule when you are in the midst of a book?

A. My schedule is relatively inconsistent. There is a lot of humming and hawing and foot shuffling before I reach my stride. I start and stop and then do it again. When I finally get into it, I can't wait to get out of bed in the morning because I'm eager to write the next part of the story. On those days, I write around 3000 words, and usually don't slow down until I'm done. As soon as I type The End, I take a short break and then I'm eager to start revising and editing. I want to polish the story until it feels right.

Q.  Are there times when your characters seem real to you and do you ever get creeped out when you realize your characters aren't real? Do they "live on" after the book, and do they demand more story time? How do you handle that?

a. I can't say that my characters ever feel real to me. Some of the actual people who are influences come to mind but I don't usually write a character very close to an actual person. I find that even when if I have a particular person in mind, a cranky boss for example, the character becomes quite different as  write them.

That being said, it may seem different to others. When I've discussed characters during a brainstorming session, I once heard my daughter remark that it sounds like I'm talking about real people.

Q. You have solid characters in your first series. Will you continue their story in a book four? If so, what can you tell us about book four?  OR - what is your current project and what can you share with out about it? 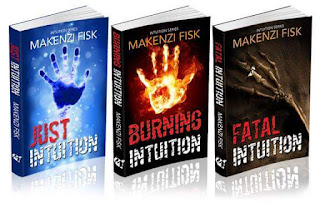 A. The Intuition Series is complete and there is resolution at the end of book three, Fatal Intuition. I did enjoy creating a female FBI character from that book and will spin her off into her own adventure in my current work-in-progress, a thriller set in Northwestern Ontario, tentatively titled Smoke and Murder. I plan to finish writing that novel on location this summer.


Thanks for joining me, Makenzi.

I read your books "in progress" and again once they were published. All three kept me glued to the page to find out what happens. Your criminal is as delightful (to read about) as she is evil. I will be watching for your next release - Smoke and Murder (if that stays). Enjoy your summer writing in your northern Ontario hide-away.

Connect with Makenzi at: www.facebook.com/makenzi.fisk