Where are your families' roots?

Canada - settled by immigrants from around the world

Immigrents from many countries came to Canada and helped her grow into the country she is today. I'm Scottish, and Scottish immigrants settled all across Canada from the 1700's forward. Both sides of my family came from Scotland but at different times. 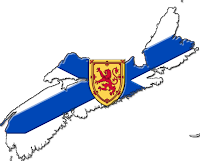 In 1773, the ship Hector sailed from Scotland and landed in Pictou Harbour, Nova Scotia. On that ship were seven MacDonald brothers, one of whom is my ancestor. There are descendents of those seven spread over Pictou and Guysborough Counties, Nova Scotia. MacDonals, Camerons, Clarkes, Frasers, MacLeans, Rumleys and more.

Much later, 1910, my father's parents immigrated from Scotland with his older sister.  They worked as farm workers in Homewood, Manitoba for a year and my father was born in July of 1912. They homesteaded later near Myrtle and Roland, Manitoba. Their holdings eventually included a full section.

My father remembers farming with the 18 horses they owned and the help of Polish farm workers.To the day he died he had a soft spot in his heart for grey-dappled Percherons'. 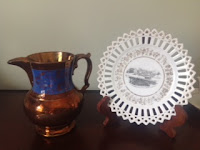 Grannie  brought with her several of her prized possessions. Among these were her weaving loom, her Luster wear milk pitcher and a plate showing the Union Bridge in Aberdeen. I have one of the blankets she made on her loom, the Luster wear milk Pitcher and the plate.

When did your ancestors come to Canada? And what are their origins? Do you have mementos of your fore-bearers?