Do you have a scar?

Childhood scars - do have one?


I think many of us do. There's the falling-off-my-bike scars and the header off my roller blades scars and the "the other kid hit me with a hammer (true story) scar."

One of my daughters has taken a header off blades and bike and rolled her car (not her fault.) She has scars. She was lucky. In the first two instances, there was a plastic surgeon intern on duty at the ER when she arrived. Her scars are minimal.


I have several scars, but the one I think of first when asked is in my hairline. It's no longer visible, but gives me a fake cow's-lick if I try to wear bangs. I have the perpetual split of hair shown here. 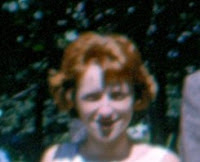 That one I've had since I was seven. We were visiting on the North Shore of Cape Breton and staying with Roddie and Jessie. The big old house had no central heating and I remember cold beds, cold floors and a chamber pot. (No plumbing either.)

On the upside, Jessie made the best Moose-Hunters ever. Those thick molasses biscuits remain a favorite of mine even after five decades. Too bad I can't make them.

But back to the scar.

The old road, partially grown in, ran along the back of the property (which had been the front) The short stretch left joined Roddie's property with Tommy-Peggy's place to the south-east. Tommy-Peggy (IE Tommy the son of Peggy) and his wife, also called Peggy, had sons our age.


My brother, Donald, and I were coming back to Roddie's along the old road, accompanied by Buddy, Brian and the dog, Skippy. The crazy dog would catch rocks so Brian was throwing them. How we got so that I was between Brian and Skippy, I don't know. But, smack, a rock hit my forehead and the blood started.

Other than crying, getting to the house and sitting while the women cleaned up the cut, I don't remember much. They did have a discussion about taking me for stitches. But the doctor was a long way away in Baddeck, and the bleeding did stop. No stitches. Just a white plaster band-aid.


And so I have a physical scar and a memory. That link to childhood opens doors to many other escapades including bees, ankles and damage. But those are stories for another day.

What scars do you carry? How did you get them?