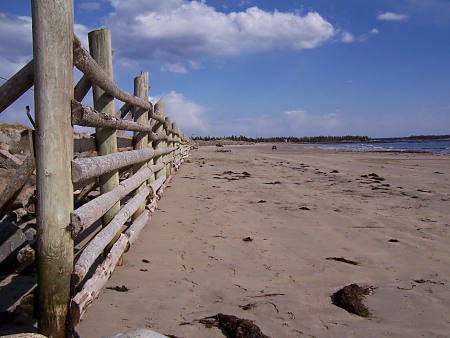 
Devon turned onto the beach road leading to the island and Caleb’s Cove. Rain sheeted on the windshield, defeating the wipers and distorting her view. Hunched forward, she followed the spit, acutely aware of the white capped waves assaulting the fence between sand and road. Torrents dissected the road and blurred sky, ocean and land into one mass. (Sheldon Harris Came Home Dead)


The third and perhaps most critical inspiration for Caleb's Cove and the island it sits on, is Georges Island and the road access to it, Crescent Beach. Located in Lunenburg County, .the LaHave Islands stagger out from the mainland, forested jewels in the Atlantic Ocean. Although details are altered for the fictional world, Devon drives along this beach road as the hurricane takes over the landscape.


Whether you want to swim, search for sea shells, or just spend the day relaxing in the sun, Rissers Beach Provincial Park offers every kind of recreational opportunity available at the seaside.
Some of the features of the park include a kilometre long white sand beach and Interpretation Centre and boardwalk along an inland marsh.

Other information about the scenery and the history of the LaHave Islands and area can be found at Lunenburg Region, Nova Scotia. The area is closely connected to the sea, to the Bluenose which is found on the Canadian Dime and the prohibition era rum running.

The land, the history and the people provide a rich background for the Caleb Cove Mysteries. (Even if the actual community and all
the folks in it are figments of my imagination.) Writing the stories is so much easier with so many potential details available in the real world.
Posted by MahrieGReid.com